We are so thrilled that 3 of our authors have been nominated for a BGE Irish Book Award 2017!

Deirdre Sullivan's Tangleweed and Brine is also nominated for Journal.ie Best Irish Book and the Eason Teen & YA Book of the Year.

And the second part of Dave Rudden's KOTBD fantasy-adventure trilogy, The Forever Court, is nominated for the Children's Book of the Year - Senior Award.

Dominion, the final instalment of the epic Chronicles of the Invaders trilogy from John Connolly and Jennifer Ridyard, is published today by Headline.

Syl Hellais is the first of the alien Illyri race to be born on Earth. Paul Kerr is a teenage Resistance fighter. In search of freedom, they found each other.

With the Illyri invasion came the promise of a new future for Mankind – one in which deserts would flourish and terminal illness would be cured – but with it also came a sleeping terror. For within the worst of the invaders dwells an ancient species known only as the Others.

Everything they touch, they devour.

Now it will fall to Syl and Paul to save this world – to save all worlds – from the horror that lurks in the darkness.

Empire by John Connolly is Out Now!

Empire by John Connolly is out to buy now in paperback!

The second in the epic Chronicles of the Invaders trilogy by bestselling author John Connolly, and Jennifer Ridyard.

He is its rebel captive.

Separated by millions of light years, their dreams are united.

And they will risk everything to make their world - all worlds - right again.

Conquest by John Connolly and Jennifer Ridyard is Out in Paperback NOW!

Syl Hellais is the first of the Earth-born Illyri, a beautiful, civilized but ruthless alien species who now rule our planet. Trapped inside the walls of her father's stronghold, hated by the humans, she longs to escape.

Humankind has not given up the fight, and Paul Kerr is one of a new generation of young Resistance leaders waging war on the invaders.

On her sixteenth birthday, Syl will become an outcast, an enemy of her people, for daring to save Paul Kerr's life.

Conquest is the first in an exciting new series for teen readers by John Connolly and Jennifer Ridyard. Explore the site for more information about Syl, Paul, their world and their creators. 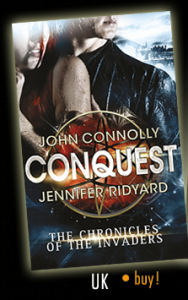 The Gates by John Connolly has been shortlisted for the Bolton Childrens Annual Book Award 2011.

This will be the seventh annual Bolton Childrens Book Award. It has proved to be a huge hit with the Children from local schools acting as judges.

Children age 11 to 14 from across Bolton take part in deciding the winner. They have until the end of May to read the books and choose their favourite. The award ceremony itself will be in June at the University of Bolton who sponsor the event.

Retribution, the apocalypse and a Viking funeral are just some of the interesting themes from this year's shortlisted titles for the Bolton Children's Book Awards 2011.

John Connollys latest Charlie Parker thriller has been moving up the charts this week.

The Whisperers, dubbed by the Daily Mail as Sensational went straight into the Hardback Bestsellers list at No.4 last week after only three days of publication. However, after a fantastic week of sales John Connolly's latest has moved up to No.3 in the Bestsellers list.

The Whisperers is continuing to receive superb reviews...

Brilliant, terrifying and effortlessly seductive, I defy anyone to put this thriller down - it is sensational. The Daily Mail

Another creepy thriller from a modern master The Daily Mirror

This is one of Connollys darker, scarier novels, all the more effective for the way the supernatural elements arise organically out of realistic detail Connolly is excellent as always at using primal archetypes to create an atmosphere of apocalyptic dread. Cancer-ridden antiquities collector Herod I am often asked if I am fond of children is one of the most haunting characters in an oeuvre not exactly short of them. John OConnell, The Guardian on Sunday .

The Darley Anderson Agency are extremely excited to announce that The Gates, by John Connolly, has been shortlisted for The Bisto Book of the Year Award 2009/10.

The book awards, in partnership with the CBI, (National Organization for Childrens Books in Ireland) sponsored by Bisto, is the most prestigious award of its kind in Ireland. The awards are open to any children's book by an author and/or illustrator born or resident in Ireland, written in Irish or English and published between 1st January and 31st December each year.

John is down to the final 10 contestants. The winner will be announced on Monday 24th May.

The Agency has received the highest ever advance from a Korean publisher for John Connolly's new stand-alone The Gates.

Munhakdongne, one of largest publishing companies in Korea, offered for the rights late last night.  Their authors include Paulo Coelho, Cormac McCarthy and Ian McEwan.  Danny Hong, our new Korean subagent, negotiated this deal and also sold Korean rights in Chris Mooney’s The Dead Room to Korea Price information in the few weeks he has been working with us.

The international bestseller from John Connolly celebrated its 10th anniversary with the release of beautiful special hardback edition.

The 'charming, disturbing and outrageously imaginative' novel, which is one of John's favourite works, is a timeless coming of age fable about life and loss.

The three books are: The Gates; The Infernals; (Hell’s Bells in the UK) and The Creeps.

Featuring a young protagonist, Samuel Johnson and his loyal dog Boswell (a dachshund) who battle the forces of darkness just prior to Halloween as the gates of hell open at a house owned by Mrs Abernathy.

The Gates: The fate of humanity lies in the hands of one small boy, Samuel Johnson; an even smaller dog and a very unlikely demon named Nurd.
The Infernals: Samuel has won over the dark forces but he is dating the wrong girl and is still being hunted by Mrs Abernathy
The Creeps: Samuel’s allies now include two demons, a monster and a handful of dwarfs. But other demons are occupying his spare room and his town appears to be cursed and he is lured into a trap which tests his ingenuity to the limit.

Empire is out now!

The second Chronicles of the Invaders installment by John Connolly and Jennifer Ridyard is out now! 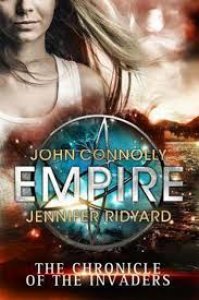 "I am left with the same feeling that I am always left when finishing the latest Connolly book - exhausted from staying up too late, and anxiously counting down the days until the next release date!"

John Connolly's The Infernals (UK title Hell's Bells) has been named one of Kirkus' BEST FICTION BOOKS OF 2011.

The Infernals is the fabulous follow on from John's YA book The Gates, continuing the adventures of Samuel Johnson and his dachshund Boswell.

"Bestselling thriller writer Connolly continues his change-of-pace saga of an ordinary English boy, his loyal dog and their encounters with demons and dark lords in this devilishly entertaining follow-up to The Gates (2009)...

...Brilliantly funny, often touching, with enough action to keep adventure fans on the edges of their chairs, this novel combines top-notch writing with cutting wit." Kirkus 2011

After hitting The New York Times list on August 1st, 2010, at No.23, The Whisperers by John Connolly is continuing to pick up fantastic reviews.

"Connolly displays a real knack for fusing the detective and horror genres, providing a rational chain of evidence and deduction for the plot while simultaneously creating a real atmosphere of numinous dread that reminds us that mystery can refer to more than a mundane tale of crime and human justice." Publisher's Weekly

In the hands of a lesser writer, this could easily be a bit too much, but in Connollys skilled hands, it turns into a page-turning thrill ride that you wont want to put down. Sacramento Book Review

The Whisperers is John Connollys latest Charlie Parker suspense thriller. Along with the current success in the US, the novel was also a hit here in the UK, spending nine weeks in the Hardback Bestsellers list. The Whisperers will be available in the UK in paperback next January.

***bestseller*** CONNOLLY'S LATEST MUCH MORE THAN A WHISPER

The Sunday Times bestselling author of The Lovers, John Connolly is back with a spine tingling new novel, and is storming the charts after only three days of sales.

The Whisperers, released on the 13th May, shot into the No.4 position in the UK Hardback Bestsellers list and into the No.1 position in Irelands, and has been receiving fantastic reviews.

His latest plot is a clever mixture of quest and chase, written in prose that unfolds at warp speed, and rarely fails to sing. The Observer

The chilling new thriller, The Whisperers, sees the return of much loved hero Charlie Parker

The border between Maine and Canada is porous. Anything can be smuggled across it: drugs, cash, weapons, people. Now a group of disenchanted former soldiers has begun its own smuggling operation, and what is being moved is infinitely stranger and more terrifying than anyone can imagine. Anyone, that is, except private detective Charlie Parker, who has his own intimate knowledge of the darkness in men's hearts.

But the soldiers' actions have attracted the attention of the reclusive Herod, a man with a taste for the strange. And where Herod goes, so too does the shadowy figure that he calls the Captain. To defeat them, Parker must form an uneasy alliance with a man he fears more than any other, the killer known as the Collector . . .

John Connolly's young adult debut The Gates is meeting with rave reviews in both the UK and US.

In the modern classic - The Book of Lost Things - John used the trappings of fairy tales to tell a dark story for adults of a boy coping with World War II and the loss of his mother. Now with The Gates he gives himself completely over to the urge to write for younger readers, creating a slapstick modern fantasy that mixes quantum physics with metaphysics.

An Amazon Top Book Of The Month - John Humphries also revealed himself a fan when he interviewed John Connolly on the Today program last week.

Sales continue to grow for John Connolly’s The Lovers in its third week The Sunday Times hardback bestseller fiction list. The Lovers is at No9 having spend two weeks in the No4 slot but with sales ever increasing.

The Lovers remains at No1 on the Irish bestseller list.

“The Lovers grabbed me by the throat at page one and wouldn’t let go. John Connolly is simply one of the best writers out there. Book after book, he writes with the intensity of a mad man and the subtlety of a poet. If you haven’t read one of his spine-tingling, masterfully-crafted novels, you’re missing out on some truly great entertainment.” –Vince Flynn