Santa's New Sleigh, the sequel to Caroline Crowe's festive picture book, Santa's New Beard, publishes today. Festive and fun, with hilarious rhyming text, this is sure to become a festive favourite for years to come!

When Santa's sleigh stops working on Christmas Eve the elves all rally round to help. Maybe they could use a slingshot? Or the owls could help? How about polar bears?

Will they be able to sort the sleigh out before it is too late? Things are not looking good until one small elf has a bright idea!

How Do You Make A Rainbow? out today

Stuck inside on a cloudy day, a little girl asks her grandad to help her paint a rainbow on the sky. But as Grandad tells her, rainbows aren't painted on the sky, they grow out of kindness, hope, and helping other people.

How Do You Make a Rainbow? is a reassuring, heart-warming story of colours, kindness, community and nature, that shows that brighter times are always around the corner.

Santa’s New Beard is out today!

When Santa accidentally shaves off his famous beard, the elves all rally round to help. Can they glue it back on? Maybe the answer is whipped cream or candyfloss. Or perhaps it's mashed potato . . .

Will they be able to sort him out before Christmas Eve? Things are not looking too good until the littlest elf has a bright idea!
Festive and fun, this is destined to become a seasonal favourite.

Is That An Elephant In My Fridge? published today

The brilliant Caroline Crowe’s, Is That An Elephant In My Fridge?, is published today!

Young readers will adore the second picture book from Crowe. Her first book, Pirates in Pyjamas, was a rip-roaring bedtime tale that captivated youngsters’ imaginations.

Is That An Elephant In My Fridge? is trunk load of fun and parents are sure to find their kids poring themselves over the fantastic pictures for hours.

We are delighted to announce that Caroline Crowe has secured a two-book deal with Little Tiger Press for her next books.

Tiny Tantrum is the first of the two and it will be released in 2015. Tiny Tantrum is about a little girl who has monstrous tantrums, until she meets a monster or two of her own!

The Fairy Dogmother, the latest funny picture book by Caroline Crowe, is released today. This fresh and funny fairy tale is all about finding your forever family, and is sure to make both chldren and adults laugh out loud!

Cinders LOVES living at Woofington's Dog Shelter. He has fantastic food and fabulous friends. So when, one day, his Fairy Dogmother appears, whatever will he wish for?

Out now in hardback.

Caroline Crowe’s seasonal picture book, Santa’s New Beard, is set for publication today in the US. Published in the UK in 2019, this humorous and fun story is fast becoming a festive favourite.

When Santa accidentally shaves off his famous beard, the elves all rally round to help. Can they glue it back on? Maybe the answer is whipped cream or candyfloss. Or perhaps it's mashed potato . . .

Will they be able to sort him out before Christmas Eve? Things are not looking too good until the littlest elf has a bright idea!

The funny, charming and beautiful Tiny Tantrum by Caroline Crowe is out now! Illustrations are by Ella Okstad.

Our fantastic children's author, Caroline Crowe, has been shortlisted for the Heart of Hawick Children's Book Award 2017!

Her swashbuckling bedtime tale Pirates in Pyjamas is one of a handful of titles nominated for the award which aims to get children excited about books and reading – for fun, learning, confidence and better life chances.

Pirates in Pyjamas is out now!

Congratulations today to Caroline Crowe as her first picture book, Pirates in Pyjamas, is published today by Little Tiger Press!

‘The wonderful rhymes and super pictures will captivate youngsters’ imaginations.’ The Sun

‘Few will be calmed by this raucous crew’s capers, but at least they’ll see that sometimes bedtime can be an adventure all its own.’ Kirkus Reviews 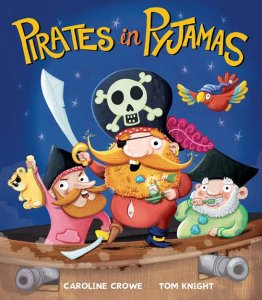