Top Tips From The Fairy Queen

Author of the popular 13 Treasures trilogy, Michelle Harrison, gave away some top tips on how to become a writer in a recent interview:

1) Read lots. As much as you can, and as widely as you can. You'll learn what makes a good story and what doesn't.

2) Write lots. Start with short stories, or write a diary/ blog. Get into the habit of writing- after you've written something, rewrite it and improve on what you have. Why not try entering competitions to spur you on?!

3) Keep at it; overnight successes are extremely rare and most writers get lots of knock-backs before having any luck... You need a thick skin to be a writer.

For the full interview in Books and Writers JNR click here.

Watch the trailer below to find out more...

Congratulations to Helen Grant and Phil Earle who have both been nominated for the prestigious Carnegie Medal.

Wish Me Dead, Helen Grant's third novel is also her third title to be nominated for the medal. Whilst Phil Earles debut novel Being Billy, which was published at the very start of 2011, is also nominated.

The Carnegie Medal is awarded annually to the writer of an outstanding book for children.

The Agency is extremely proud of both their talented authors for being nominated.

To read more about the nominations and the Carnegie Medal click here.

The funny thing is I never even meant the first one. Now I bitterly regret visiting the cursed witch’s house, deep in the middle of the forest. It’s where I made my wishes.

I wished for the most gorgeous boy in town to finally notice me... It came true.

I wished to be rid of the poisonous busybody who destroyed my family... It came true.

I didn’t mean for this to happen.

Not me, Steffi Nett, the shy one who never says anything. But as the body count increases with every wish I make . . .who else could it be?

Wish Me Dead is published by Penguin/Puffin.

The Gates by John Connolly has been shortlisted for the Bolton Childrens Annual Book Award 2011.

This will be the seventh annual Bolton Childrens Book Award. It has proved to be a huge hit with the Children from local schools acting as judges.

Children age 11 to 14 from across Bolton take part in deciding the winner. They have until the end of May to read the books and choose their favourite. The award ceremony itself will be in June at the University of Bolton who sponsor the event.

Retribution, the apocalypse and a Viking funeral are just some of the interesting themes from this year's shortlisted titles for the Bolton Children's Book Awards 2011.

We are thrilled to announce that The Vanishing of Katharina Linden by Helen Grant has won a US Alex Award!

The Alex Awards are given to ten books written for adults that have special appeal to young adults, ages 12 through 18. The winning titles are selected from the previous year's publishing.

Alongside Helen’s US debut novel The Vanishing of Katharina Linden, other winners include The House of Tomorrow by Peter Bognanni, Room: A Novel by Emma Donoghue and Breaking Night: A Memoir of Forgiveness, Survival, and My Journey from Homeless to Harvard by Liz Murray

It has been a record breaking, spectacular year at the Darley Anderson Agency!!!

From fantastic deals for our debut authors to Bestseller List achievements both sides of the Atlantic, here are some of the highlights from the past year

Not only have DAA authors been bestsellers in the UK and across the Atlantic in the US but also all around the world including Australia, New Zealand, Italy, Germany, Bulgaria, Poland, Portugal, China and The Netherlands.

Some bestselling highlights include Lee Child being No. 1 globally with The Affair. Whilst earlier in the year Lesley Pearse was emphatically No.1 on the Sunday Times Hardback List, followed by the Paperback List, with her novel Belle. And Martina Cole, with her latest gritty crime novel The Faithless, went to No. 1 on the Hardback Bestseller Fiction List. And also achieved Martina her highest ever first week of sales.

Martina continued to reign Queen of Crime with the Hardback Christmas No. 1.

World Clamours for Darley Anderson Debuts as written in The Bookseller.

The Darley Anderson Agency has enjoyed phenomenal success in 2011 thanks to the good work of the new Foreign Rights team, Clare Wallace (Rights Manager) and Mary Darby (Rights Assistant).

An Arabic World Rights deal was closed for Lee Child meaning that he is now sold in a staggering 95 territories and 40 languages.

And it appears that Germany cannot get enough of Tana French with all three of her books appearing on Bestseller Lists over the course of the year.

As well as the DAA established authors having great foreign sales and deals throughout 2011, our debut authors have also been picking up a lot of attention with fierce auctions, fantastic deals and high sales!

New authors C.J. Daugherty, Emma Garcia and Kimberly Willis have all picked up a lot of attention at this years Bookfairs with auctions being fought out at the table, including a high six figure German deal for C.J. Daughertys Night School taking place at Frankfurt.

Margaret Dickinsons, Sons and Daughters was long listed for the RNA Romantic Novel of the Year Award, as well as the East Midlands Book Award

Faithful Place by Tana French is shortlisted for the L. A. Times Book Prize

And finally, a couple of fantastic record-breaking facts

This year, Martina Cole became the first British female adult-audience novelist to surpass the 50 million sales mark since Neilson Bookscan records began. She is one of 15 authors to have achieved these incredible sales, only two of which are British.

And Lee Child became the fifth author to join the Kindle Million club- selling over a million e-books on Kindle!

Huge Congratulations to all of the DAA Authors and may your success continue and grow throughout 2012!

John Connolly's The Infernals (UK title Hell's Bells) has been named one of Kirkus' BEST FICTION BOOKS OF 2011.

The Infernals is the fabulous follow on from John's YA book The Gates, continuing the adventures of Samuel Johnson and his dachshund Boswell.

"Bestselling thriller writer Connolly continues his change-of-pace saga of an ordinary English boy, his loyal dog and their encounters with demons and dark lords in this devilishly entertaining follow-up to The Gates (2009)...

...Brilliantly funny, often touching, with enough action to keep adventure fans on the edges of their chairs, this novel combines top-notch writing with cutting wit." Kirkus 2011

With over 200 back-to-back meetings, Darleys Rights team have had a very busy Frankfurt.

German, Brazilian and Dutch auctions were all finalized at the fair for new young adult fiction writer C. J. Daughertys Night School, which included a high six figure German deal made by Clare Wallace, Rights Manager. The Rights team are now in the process of rounding up auctions started during the fair for Night School in Finland, Poland and Italy. Never Google Heartbreak, a hilarious dut by womens fiction author Emma Garcia, also proved to be a big Frankfurt Hit with auctions and deals happening over the week! 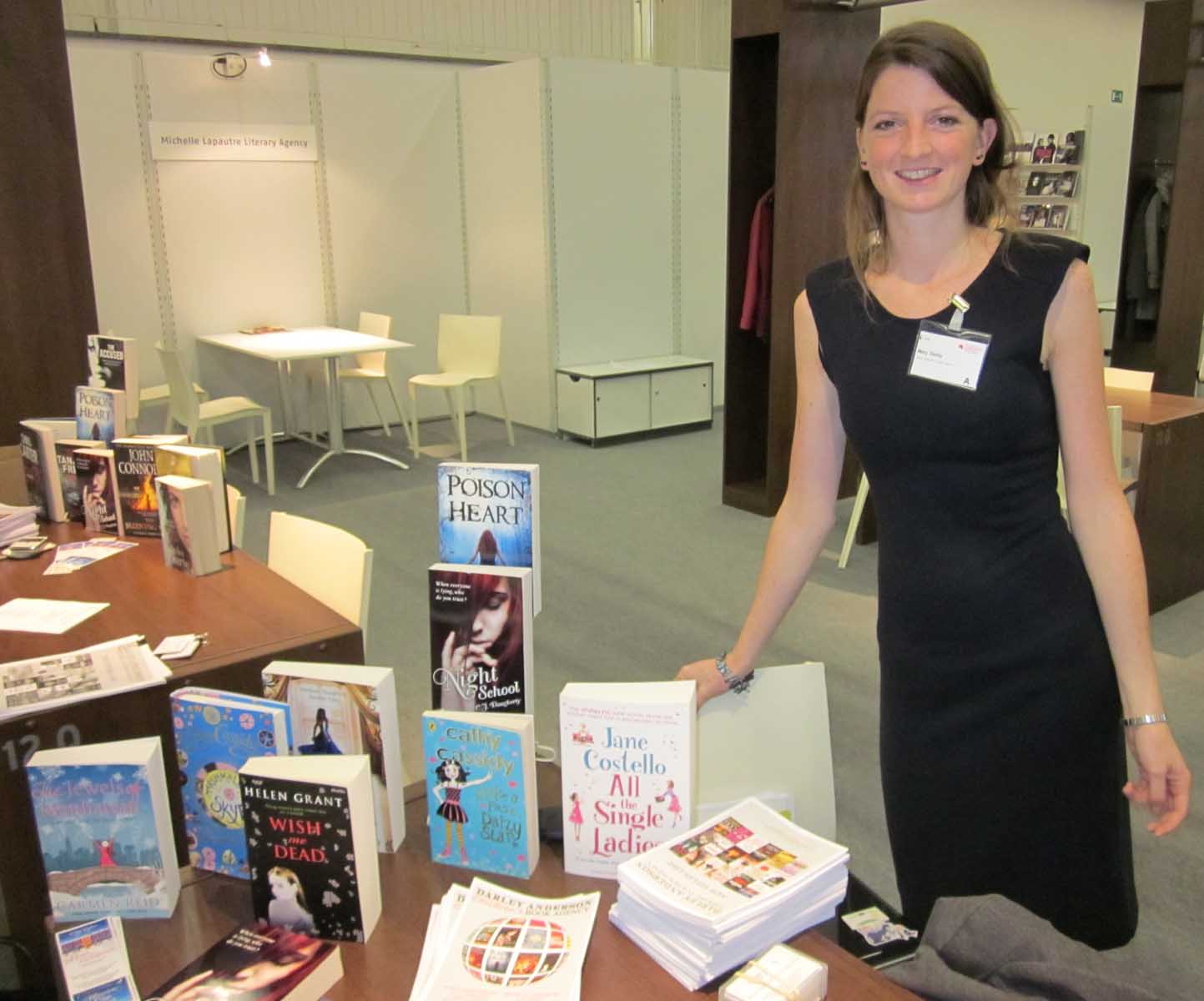 All other DAA books and authors were attracting lots of attention and, despite the difficult economic climate, the fair was buzzing and all the publishers were filled with energy and excitement, looking for the next big bestsellers to snap up.

I absolutely loved my first Frankfurt. It was such a pleasure to meet so many amazing publishers and I cant wait for next year. Mary Darby, Rights Assistant 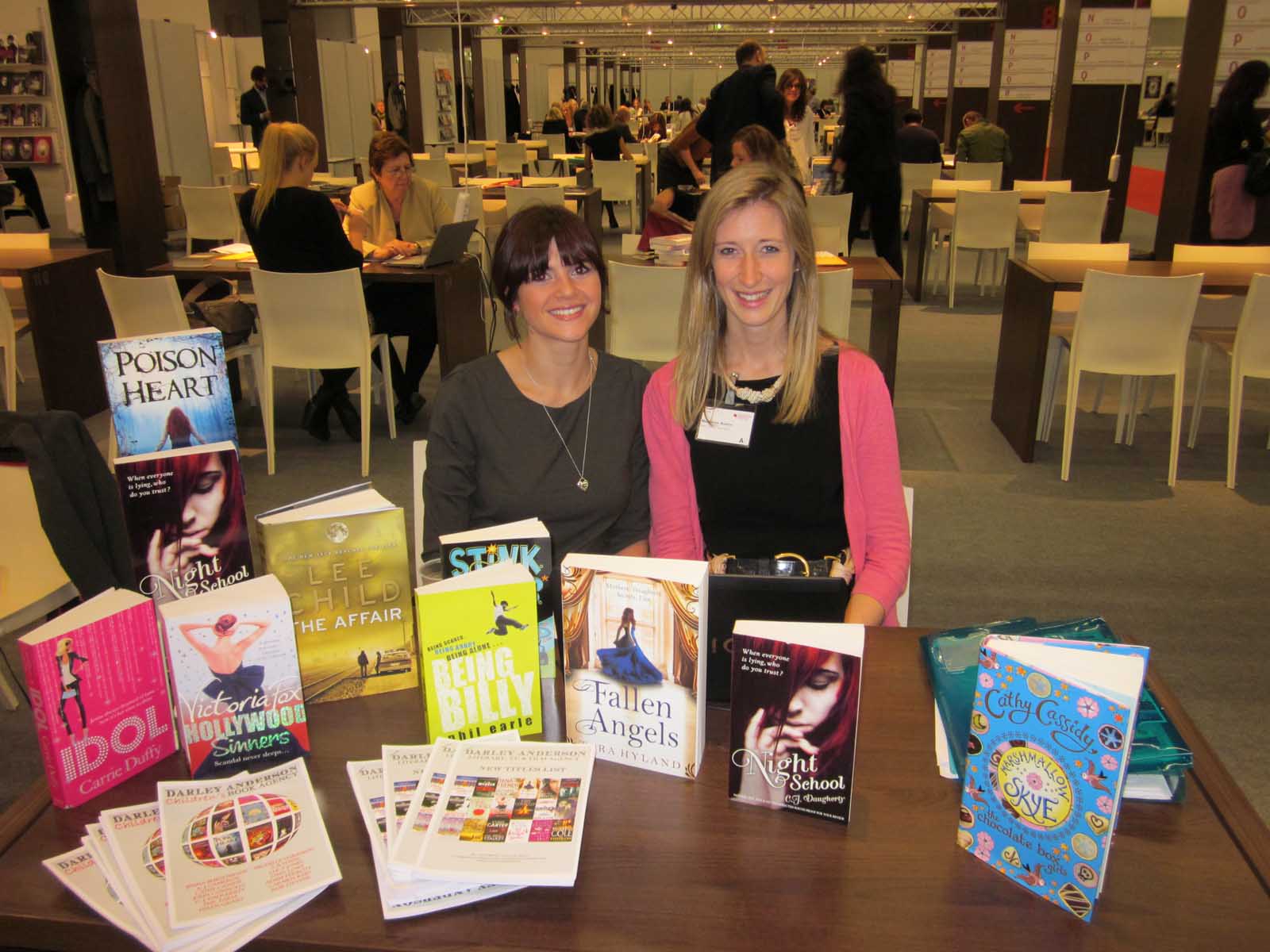 The fair was an incredible experience! Meeting with so many wonderful publishers is invaluable and handling translation rights for our fantastic authors is an absolute joy. Clare Wallace, Rights Manager

Inside The Mind Of A... FAIRY QUEEN

In a recent interview with the Guardian, Darley Anderson magical children's author, Michelle Harrison talked about her first brush with Fairy Magic, her inspirations and her all time favourite fairy stories...

Michelle on her first fairy story experience: The first fairy story to have an impact on me was one invented by my older sister, Theresa. It was of a fairy who had been killed by a wicked witch and buried in our garden. The lack of a happy ending led me to wonder if it was true and, morbid child that I was, I dug in the flowerbeds in search of that fairy. After that I quickly became familiar with the usual tales of good fairies granting wishes and collecting teeth, and gradually lost interest, preferring stories of adventure, mystery, and ghosts.

Michelle on her inspiration: My interest in fairies was revived unexpectedly during a college illustration course. I discovered the art work of Arthur Rackham, Alan Lee, and Brian Froud. It completely changed the way I viewed fairies and prompted me to research deeper into British folklore. There I found stories of fairies that were deceitful, malicious even deadly. I knew I had to write about them, and I've been hooked on the darker side of fairy tales ever since.

Click here to read more about Michelle and the Thirteen Trilogy.

Congratulations to Phil Earle on the publication of his debut children’s novel BEING BILLY.

Being Billy has been picking up lots of attention and getting fantastic praise:

"Being Billy shows us the dark side of being a child in care. Phil Earle writes starkly but sensitively about damaged children in this brilliant page-turning novel. It moved me to tears." Jacqueline Wilson

"I thought Being Billy was a total page-turner - authentic and gritty. Once I'd begun, I literally had to read the whole MS straight away because I really needed to know what would happen. Billy's voice doesn't falter and he's a great protagonist - spiky, brave and compassionate." Jenny Downham, author of Before I Die

"Moving and powerful, I loved it" Sophie Mackenzie, Author

Being Billy was published by Puffin on 7th January.

What do you do when your new parents decide they don’t want you...

Faces flashed before my eyes. And for every face there was a time that they had let me down. Each punch that landed was revenge, my chance to tell them I hadn’t forgotten what they did.

Eight years in a care home makes Billy Finn a professional lifer. And Billy’s angry – with the system, the social workers, and the mother that gave him away. As far as Billy’s concerned, he’s on his own. His little brother and sister keep him going, though they can’t keep him out of trouble. But he isn’t being difficult on purpose.

Billy’s just being Billy. He can’t be anything else. Can he?