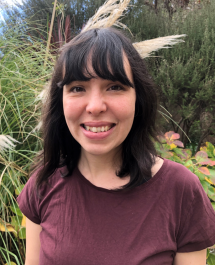 Polly Ho-Yen was born in Northampton and brought up in Buckinghamshire. She studied English at Birmingham University before working in publishing for several years.

She now writes full-time and lives in Bristol with her husband.

For all of Polly's latest news, please click here

The Boy Who Grew a Tree

Nature-loving Timi is unsettled by the arrival of a new sibling and turns to tending a tree growing in his local library. But there is something magical about the tree and it is growing FAST… and the library is going to close. Can Timi save the library and his tree, and maybe bring his community closer together along the way? A charming early reader for ages 5-8, filled with black-and-white illustrations.

The Day That No One Woke Up

Something strange is happening in Ana’s city . . . she’s the only one awake. Confused and curious, Ana sets off to explore, bumping into the one other person who’s been able to rouse themselves – her ex–best friend, Tio. On a mission to discover what’s happening, Ana and Tio journey through the city looking for clues, their friendship mending with every step. When a mysterious creature suddenly materialises in front of them, Ana realises they’ve found the answer they’ve been looking for. But one question still remains: Why them?

How I Saved The World In A Week

Billy’s mum isn’t like other mums. He calls her Sylvie, they move house every few months and she spends all their time together teaching him The Rules of Survival – how to make fire, build shelter and find food. Following the Rules is the only thing Sylvie asks of Billy and the tests get more extreme, until one day she goes too far . . . Whilst Sylvie is getting better, Billy has to live with the dad he’s barely met.

At Dad’s, Billy misses his mum and keeps practicing the Rules, but he also learns new things, like how it feels to make a friend and be part of a different type of family. And then the world changes for ever. People are being infected with a mysterious virus that turns their skin grey. Chaos breaks out and Billy and his family flee the city. Their journey is the ultimate test of survival and Billy knows that this was what Sylvie was preparing him for. She knew what was coming. But once he has gotten his family to safety, Billy still has to find Sylvie and tell her what he’s discovered about the ‘Greys’ – not just to save his family, but the whole world.

Mae spends a lot of time in hospitals. She's had asthma since she was little and sometimes she just can't breathe. She was in hospital the very first time she saw the hole - a tear in the universe which seems to appear only to her. Before she knows it she is drawn into a parallel world, where things aren't quite the same...

Lula and Lenka are best friends and total opposites – Lula is a Dog Person and Lenka is a Cat Person; Lula is super messy and Lenka is neat and tidy; Lula likes talking to people and Lenka likes watching people – but together they make the perfect pair. Until The Day that Everything Goes Wrong … and suddenly the girls are no longer friends. What started as a day like any other ends with Lula and Lenka ignoring each other and sitting on opposite sides of the classroom. As the days go by Lula makes a new friend who talks almost as much as she does, while Lenka just plays on her own. In spite of feeling lonely, neither one is prepared to listen or forgive … or to say sorry. Will it be this way forever?

A thoughtful story exploring friendship and the importance of listening and keeping an open mind.

Feeling lost and alone in a strange new city, Leelu wishes she could fly away back home – her real home where her dad is, thousands of miles away.

London is cold and grey and the neighbours are noisy and there’s concrete everywhere.

But Leelu is not alone; someone is leaving her gifts outside her house – wonders which give her curious magical powers.

Powers which might help her find her way home . . .

Hidden in the water, something is stirring . . .

The children of Mivtown have grown up hearing the legend of the monsters of the loch. But it’s only a story – a warning to stay away from the water.

Then strange things start happening in the village. Effie’s rabbit Buster escapes from a locked hutch, her mum disappears without trace and slugs start to infest her home.

Along with her best friend Finn, Effie begins to hunt for clues to solve the mysteries of Mivtown. Could this all be connected to the legend? Is it really just a story or is there something lurking in those deep, dark waters.

Boy In The Tower

A CAPTIVATING DÉBUT ABOUT FEAR AND HOPE, LONELINESS AND FRIENDSHIP, AND A YOUNG BOY TRYING TO FIND HIS WAY HOME

Random House Children's Books published in July 2014. BOY IN THE TOWER has been nominated for the Blue Peter, Carnegie and The Branford Boase awards, among many others. See Polly's News Page for more information.