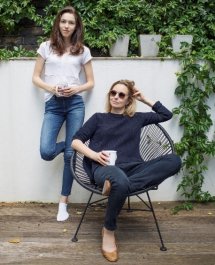 Honor Cargill began writing when she was about sixteen, co-authoring the funny teen series, Waiting for Callback (Simon & Schuster). Honor read Classical Archaeology and Ancient History at Oxford and is now studying for a masters in the History of Art. She enjoys researching party scenes and also writes non-fiction history.

Perdita Cargill spent years working as a commercial barrister before she finally turned to writing. Bizarrely for a pessimistic Scot, she loves to write funny books. She is the co-author with Honor Cargill of the Waiting for Callback series (Simon & Schuster) and lives in London.

Monday 17th January
It’s finally time for the school trip! And we’re off to the SPOOKIEST castle I have EVER seen!

Bea Black is in her second term at witch school and she can’t wait for the Year Seven residential trip to the haunted Cadabra Castle. The students are excited to fly around the famous GO pitch, explore the ancient turrets and have a magical time … if they can just stop arguing! Except Ms Sparks has other plans – this isn’t a holiday, it’s a team-building exercise for a class who desperately need to learn to work together.

But with rumours of a ghost terrorizing the castle, Bea has a lot more to contend with than scavenger hunts and hikes! Not least being paired up with Blair Smith-Smythe, her ULTIMATE frenemy! Will the class learn anything from their time at Cadabra? And more importantly, will Bea and Blair manage to avoid hexing each other for long enough to solve the spooky mystery?

Monday 1st November
There’s only fifty days until the Winter Solstice, the longest and witchiest night of the year. But before that there’s the Grand Tournament – the biggest and sportiest day in the witchy calendar! And I can’t wait!

Bea Black is all settled into her new life in Little Spellshire, a town with a magical secret. She’s made tonnes of friends at witch school, learned how to levitate frogs (just about) and been working hard on polishing up her broom skills. So when the Winter Solstice Grand Tournament rolls round, she’s ready to rise to the next challenge and fly high.

But then Ms Sparks decides that this year’s tournament will be a bit … er … different. That is, it won’t be an Extraordinary Grand Tournament at all, but rather a very ordinary sports day with Spellshire Academy! With magic firmly forbidden and rivalry reaching new heights, who will emerge victorious? And more importantly, will Bea’s friendship with her best non-witchy friend Ash survive the competition?

Diary of an Accidental Witch

Monday 20th September
I’M AT WITCH SCHOOL! Now would be a really good time to discover I can do magic…

Bea Black has just moved to Little Spellshire, a town with a magical secret. When her dad accidentally enrols her at the local witch school, she has to get to grips with some interesting new classes, like, NOW! Also on her to do list? Make friends, look after the grumpy class frog AND do everything humanly magically possible to stay on a broom…

But with the Halloween Ball on the horizon, will she be able to master her wand skills in time to WOW? And more importantly can she keep her newfound magical abilities a secret from dad?

A perfect potion of magic and mischief, DIARY OF AN ACCIDENTAL WITCH is THE WORST WITCH meets TOM GATES.

It’s a BIG year for Elektra. She’s wrapped her first feature film Raw (even if her character was unexpectedly killed off halfway through filming) and hosted – against the odds – the party of the year (well, until her mum turned up and kicked everyone out) so things are definitely moving in the right direction.

But she’s still not sure what’s going on with Archie, her bff Moss’s love life is in shreds and GCSEs are looming. And the countdown to Raw’s release is terrifying, not least because it turns out there’s more to promoting a movie than messing around on Insta…#ComingSoon, #ElektraExposed #RawTerror. Elektra’s Road to acting stardom is as rocky as ever…

Elektra has finally landed a part in a film. It’s the dream. Well … until she works out that Straker is a movie so dystopian that within weeks most of the cast and all of the crew wish that the world had actually ended (preferably in scene one). And while it’s obviously great news that she’s moved from the friend-zone with Archie to become his almost-girlfriend, it would be better if he hadn’t immediately relocated to Transylvania to play a vampire hunter surrounded by ‘maidens of peerless beauty’…

When Elektra is discovered by an acting agent, she imagines Oscar glory can't be far away, but instead lurches from one cringe-worthy moment to the next! Just how many times can you be rejected for the part of 'Dead Girl Number Three' without losing hope? And who knew that actors were actually supposed to be multi-lingual, play seven instruments and be trained in a variety of circus skills?

Off-stage things aren't going well either - she's fallen out with her best friend, remains firmly in the friend-zone with her crush and her parents are driving her crazy. One way or another, Elektra's life is now spent waiting for the phone to ring - waiting for callback.

Can an average girl-next-door like Elektra really make it in the world of luvvies and starlets? Geek Girl meets Fame meets New Girl in this brilliantly funny new series!