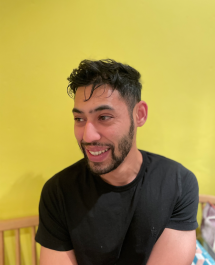 Nathanael Lessore can run 100 metres in under 10 minutes and has trouble finding sunglasses that frame his face properly.

He currently works for a software company that supports the healthcare industry through automation. Nathanael became a Marketing Exec after graduating from the University of East London, believing at the time that a Creative Writing degree destined him for a career in marketing. Writing his first book gave him the opportunity to show his South East London childhood as the funny, warm, adventurous world that wasn't always represented as such. Celebrating diverse characters gave Nathanael the opportunity to represent kids who otherwise would never see themselves in this light in this form of literature.

He grew up in a North Peckham estate as one of eight children to French and Madagascan parents. Becoming a writer is a dream come true, and he will never take this journey for granted. His debut novel will be published in 2023.

Shaun (aka MC Growls) is ready to drop his best bars and smash the competition at Raptology. That way, he's convinced Tanisha, his crush, will finally give him a chance.

But when a livestream practice goes epically wrong, Growls's dirty laundry is literally exposed. He's finally achieved his dreams of going viral - not in the good way.

Now Tanisha won't look at him, he's the joke of the school and there's no way he can show his face at the competition. Will he ever catch a break?

Then a new girl on the block appears who might be just the friend Growls needs. Especially when she points out that Raptology could be the answer to his problems after all. . .