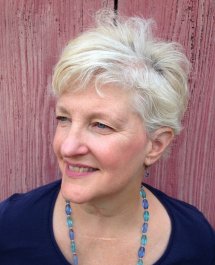 Mimi Thebo is a multi Carnegie-medal nominated author for children and teens. She writes about recovery from trauma and her books often feature deep connections to animals and the natural world. Her work has been translated into twelve languages, adapted for a BAFTA-winning BBC film, and signed for deaf children by ITV.

Born in the USA, she is based in South West England, where she is Reader in Creative Writing at the University of Bristol and lives with her husband of 35 years, her teenage daughter, her dog and the very last cat she will ever own. She writes in a tiny shed in her back garden early in the morning, when sensible people are asleep.

My life had been saved...and boy, was I annoyed. Humour and attitude keep Coco going when things get grim. Her relationships with her mother, hospital staff and other injured teens sustain her when her school friendships fall apart. But although everyone's working to give Coco a normal life, Coco doesn't think 'normal' is enough... When she was fourteen, the author Mimi Thebo died in a car accident. Hospital High is a young adult novel based on the day she died and the subsequent three years spent recovering from the accident.

Sometimes I get that feeling like everyone can see right through me. Like all my secrets and thoughts and things I don't want anyone to see are hanging all over me.

My mum has exiled me; sent me halfway across the world to live with her sister in Kansas. Have you ever been to Kansas? The emptiness is overwhelming.

Everyone thinks I'm a failure. But then he sees me. The coyote, eyes golden and wild. And I guess it's because someone's watching me, but I start to dance.

Darcy's life was never exactly simple, but it was about to become a lot more complicated.

Recovering from a distressing illness in her parents' cabin surrounded by looming pine trees, Darcy spends most of her days alone, warming herself by the log fire. That is, until she ventures into the woods hours before a heavy snowstorm, and finds herself face-to-face with a grizzly bear. Their encounter takes a surprising turn when it flourishes into a warm and caring companionship.

Set against the beautiful backdrop of the snowy Yellowstone National Park in Montana, Mimi Thebo's poetic tale inspires compassion and friendship, sensitively focusing on how the seemingly impossible can become the achievable.

Nobody wants to play with Lucy on her first day in school. So her teacher gives her some chalks and Lucy begins to draw animals on the playground. She doesn't notice Zack and Ibrahim sitting at opposite ends of a nearby bench, watching her. As the three stories progress, Lucy, Zack and Ibrahim overcome the awkwardness of being alone at a new school, and become the best of friends, drawing together.

Artie has everything. His parents are making a serious fortune for themselves as sports agents, they’ve got a dream house with every kind of toy and gizmo a kid could ever desire, and Artie and his younger brother and sister (this twins) go to glamorous parties every weekend in designer clothes, where they hang out with sporting celebrities… Oh, and did I mention Artie’s own phenomenal football ability? He’s already got some premiership talent scouts watching him.

In spite of all this, Artie’s miserable. Why? Well, he hardly sees his successful parents, never gets to spend much time in their dream home and he and his best mate, Matt, aren’t getting on so well. In fact, having school days with Matt and weekends with his parents is like living in two separate worlds. Grandad is the only thing that holds these worlds together. But Grandad’s loopiness is getting worse. And only Artie knows…

Jack decides to track down his father when his mother announces she is to re-marry. Jack is a bit of a geek – he’s a whizz-kid; into nutritional values of food and goes to a school for gifted children. It’s this that introduces the element of humour to the novel, through his friendships at school with other equally gifted kids.

During Jack’s search, he befriends a homeless Big Issue seller, plus dog, and a Black soul singer – soul music is a feature of the novel. The two men try to dissuade Jack from finding his father, since they know he lives with the a ‘no-good bunch of hobos’ who live on the streets, funded by crime and even child abuse.

Eleven-year-old Billy's mother has just died. Billy's father isn't coping too well so Billy goes to stay with his dull Auntie Mary. The death of his mother has taken all the colour away from Billy's world. He sees his Auntie Mary as a grey person, whose dull blue house is shrouded in fog. Billy feels foggy and dull, too, and longs for the colour to return to his life. His mother was a well-known surfer – Kitten Brown – and the author has woven into this novel the buzzing vibes of the surfing world. Waves, movement, colour, VW combis, Cornwall, surfing songs – described through Billy's dreams as he sleeps away his grief. For though Billy's mother is dead, her joyful personality pervades the whole story as Billy, Auntie Mary and Billy's dad all attempt to deal with their grief. The author confronts the themes of loss and change in a most vibrant and original way. Her writing is sensual – colour, taste, smell, touch and sound all leap from the page. She shows how different people handle loss and change differently, and how they learn to relate to each other in new ways.