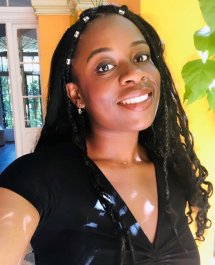 Maria Motunrayo Adebisi is an avid biscuit eater and anime fiend who enjoys lip syncing badly to songs and going on adventures. She currently works for Beam, a crowdfunding website that helps people experiencing homelessness into secure jobs and housing. She’s been working for Tech startups for a few years, but graduated from the University of Oxford with a degree in English Literature.

Writing her middle grade fantasy Jujuland: Koku Akanbi and the Heart of Olòkun helped Maria Motunrayo on her journey to fully embracing identity as a British Nigerian. She grew up in a middle of nowhere suburb in Ealing (also known as Greenford) as the middle child to two Nigerian parents from the Yoruba tribe who wanted her to be a doctor, or at worst, a lawyer. So they were pretty surprised by her literary aspirations, but now they’re proud as can be! Maria Motunrayo’s debut novel will be published in 2023.