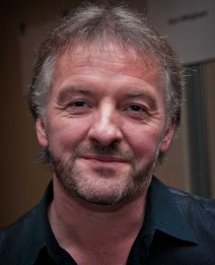 John has written three books for children in the Samuel Johnson series, a young adult fantasy, Conquest, with Jennifer Ridyard and a stand-alone coming-of-age, The Book of Lost Things. His short story collection, Nocturnes, was adapted for BBC Radio Four.

John was born in Dublin, Ireland in 1968, and has, at various points in his life, worked as a journalist, a barman, a local government official, a waiter and a dogsbody at Harrods. He studied English at Trinity College, Dublin and journalism at Dublin City University, subsequently spending five years working as a freelance journalist for The Irish Times newspaper, to which he continues to contribute.

He is based in Dublin but divides his time between his native city and the United States.

Syl Hellais is the first of the alien Illyri race to be born on Earth. Paul Kerr is a teenage Resistance fighter. In search of freedom, they found each other.

With the Illyri invasion came the promise of a new future for Mankind – one in which deserts would flourish and terminal illness would be cured – but with it also came a sleeping terror. For within the worst of the invaders dwells an ancient species known only as the Others.

Everything they touch, they devour.

Now it will fall to Syl and Paul to save this world – to save all worlds – from the horror that lurks in the darkness.

This is the final instalment of the epic Chronicles of the Invaders trilogy.

Syl Hellias: an Illyri, the first of her kind to be born on Earth. Paul Kerr: a human, dedicated to his people's resistance of the alien invasion. Brought together by chance they formed the strongest of bonds. Now they are to be punished for that love.

Exiled to the outermost reaches of the universe, Syl and Paul must each make journeys that will lead them to the horrifying truths harbored at the heart of the Illyri Empire. And to a force with the power shake the the universe to its very core.

Samuel Johnson is not in a happy place.He is dating the wrong girl, demons are occupying his spare room, and the town in which he lives appears to be cursed.

But there is some good news on the horizon. After years of neglect, the grand old building that once housed Wreckit & Sons is about to reopen as the greatest toyshop that Biddlecombe has ever seen, and Samuel and his faithful dachshund Boswell are to be guests of honour at the big event. A splendid time will be had by all, as long as they can ignore the sinister statue that keeps moving around the town, the Shadows that are slowly blocking out the stars, the murderous Christmas elves, and the fact that somewhere in Biddlecombe a rotten black heart is beating a rhythm of revenge.

A trap has been set. The Earth is doomed. The last hope for humanity lies with one young boy and the girl who's secretly in love with him. Oh, and a dog, two demons, four dwarfs and a very polite monster.

The start of an epic new series from bestselling author John Connolly, and Jennifer Ridyard. For fans of The 5th Wave.

Earth is no longer ours. It is ruled by the Illyri, a beautiful, civilised yet ruthless alien species. But humankind has not given up the fight, and Paul Kerr is one of a new generation of young Resistance leaders waging war on the invaders.

Syl Hellias is the first of the Illyri to be born on Earth. Trapped inside the walls of her father's stronghold, hated by the humans, she longs to escape.

But on her sixteenth birthday, Syl's life is about to change forever. She will become an outcast, an enemy of her people, for daring to save the life of one human: Paul Kerr. Only together do they have a chance of saving each other, and the planet they both call home.

For there is a greater darkness behind the Illyri conquest of Earth, and the real invasion has not yet even begun...

Samuel Johnson - with a little help from his dachshund Boswell and a very unlucky demon named Nurd - has sent the demons back to Hell. But the diabolical Mrs Abernathy is not one to take defeat lying down.

When she reopens the portal and sucks Samuel and Boswell down into the underworld, she brings an ice-cream van full of dwarfs as well. And two policement. Can this eccentric gang defeat the forces of Evil? And is there life after Hell for Nurd?

Young Samuel Johnson and his dachshund Boswell are trying to show initiative by trick-or-treating a full three days before Hallowe'en. Which is how they come to witness strange goings-on at 666 Crowley Avenue.

The Abernathys don't mean any harm by their flirtation with Satanism. But it just happens to coincide with a malfunction in the Large Hadron Collider that creates a gap in the universe. A gap in which there is a pair of enormous gates. The gates to Hell. And there are some pretty terrifying beings just itching to get out...

Can Samuel persuade anyone to take this seriously? Can he harness the power of science to save the world as we know it?

The Book Of Lost Things

High in his attic bedroom twelve year old David mourns the loss of his mother.He is angry and he is alone, with only the books on his shelf to keep him company.

But those books have begun to whisper to him in the darkness and as he takes refuge in the whispers and fairytales so beloved of his dead mother he finds that the real world and the fantasy world have begun to meld. The Crooked man has come, with his mocking smile and his enigmatic words: "Welcome your majesty, all hail the new king."

As war rages across Europe, David is violently propelled into a world that is both a constrict of his imagination yet frighteningly real, a strange reflection of his own world composed of myths and stories, populated by worves and worse than wolves and ruled over by a faded king who keeps his secrets in a legendary book...