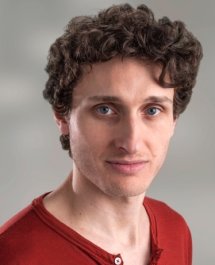 Hugh Holman is a zoologically-trained actor, who also writes books. He is from a tiny hamlet called The Shoe, which is just outside Bath, though he currently resides in London.

The Almost Animals is where Hugh's fascination for natural history meets his bizarre imagination.

Everyone has heard of crocodiles.
Everyone has also heard of alligators.
But have you heard of a crocogator?
How about an orangupanda or a deerkat?
Or a rhinuffalo?

These, and other marvellously peculiar creatures, are THE AMINALS! They are animals, they are just a bit mixed up.

Angle decides that she must leave Nowhere, the cliff-side village of the aminals, and venture into Elsewhere. But does Angle belong anywhere? She must encounter aminals, animals, and even a furry boulder to find out...