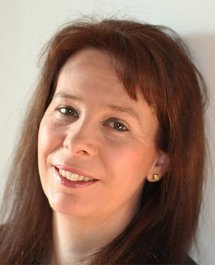 Helen Grant was born in Westminster, London in 1964.

She has always loved writing and as a child would get into trouble for writing stories under the desk during maths lessons. After her degree in Classics at Oxford University, Helen went on to pursue a career in marketing.

Helen lives in Scotland where she moved to from Brussels. Previously she lived in Bad Münstereifel, in the Eifel area of Germany, with her husband, two children and their cat. She maintains stong ties with Bad Münstereifel and its incredible ghoulish legends.

All three of Helen's standalone titles have been long-listed for the CILIP Carnegie Medal, with her début, The Vanishing of Katharina Linden, being short-listed.

Urban Legends, the final book in the Forbidden Spaces trilogy, was published in March 2015.

Langlands House is haunted, but not by the ghost you think.

Augusta McAndrew lives on a remote Scottish estate with her grandmother, Rose. For her own safety, she hides from outsiders, as she has done her entire life. Visitors are few and far between - everyone knows that Langlands House is haunted.

One day Rose goes out and never returns, leaving Augusta utterly alone. Then Tom McAllister arrives - good-looking and fascinating, but dangerous. What he has to tell her could tear her whole world apart.

As Tom and Augusta become ever closer, they must face the question: is love enough to overcome the ghosts of the past?

In the end, Langlands House and its inhabitants hold more secrets than they did in the beginning...

A group of story-tellers are disappearing one by one. A young woman is haunted by her past. A serial killer has one target he is desperate to hunt down.

Veerle is trying to lie low, to live as 'normal' a life as she possibly can. But when you've thwarted a serial killer, it's hard to do this. Especially when he wants revenge...

People are falling from the rooftops of Ghent. But did they throw themselves off? Or did somebody push them?

Veerle has seen enough death to last a lifetime. But death isn't finished with Veerle just yet.

When people start to die in her new home town, some put it down to a spate of suicides. Some blame the legendary Demons of Ghent. Only Veerle suspects that something - somebody - has followed her to wreak his vengeance.

But she watched the hunter die, didn't she?

Seventeen-year-old Veerle is frustrated with life in suburban Brussels. But a chance encounter with a hidden society, whose members illegally break into unoccupied buildings around the city, soon opens up a whole new world of excitement - and danger.

When one of the society's founding members disappears, Veerle suspects foul play. But nothing can prepare her for the horror that is about to unfold when an old foe emerges from the shadows...No one is safe, and The Hunter will strike again....

The funny thing is I never even meant the first one. Now I bitterly regret visiting the cursed witchs house, deep in the middle of the forest. Its where I made my wishes.

I wished for the most gorgeous boy in town to finally notice me... It came true.

I wished to be rid of the poisonous busybody who destroyed my family... It came true.

I didnt mean for this to happen.

Not me, Steffi Nett, the shy one who never says anything. But as the body count increases with every wish I make . . .who else could it be?

"Another crackingly scary modern gothic tale from Grant. Wish Me Dead is the kind of book that makes you want to curl up on the sofa on a rainy day and devour it in one go. Highly recommended." - CHICKLISH

In 1928, a series of mediaeval stained glass windows from the German abbey of Steinfeld were auctioned at Sotheby’s for the modern equivalent of £900,000.

A similarly fabulous series of windows plundered from the sister abbey of All Saints still exist, hidden at a remote location in the German Eifel. According to legend, the glass is haunted by the demon Bonschariant, who brings death in its most terrifying form to those who possess it.

18 year old Lin Fox has been unwillingly relocated to the Eifel by her father, Dr. Oliver Fox, who is determined to find the lost glass in an attempt to rebuild his failing career and finances. As his search begins, a series of horrific deaths plagues the town. Someone is stalking anyone who comes too close to the hidden glass, and no-one is safe – not even the most innocent. Can it be that the tale of Bonschariant is more than a legend?

Embroiled in her own worries, Lin is not interested in the legend of the All Saints glass until she meets a local boy who claims to know its location. Lin must now decide whether to share her discovery with her feckless father and risk the consequences for the whole family – or to go to the place where the glass is hidden and confront the truth of “Bonschariant”.

Like her debut title, Helen Grant’s astonishing tale beautifully captures the innocence and intrigue of childhood, only to taint it with the grown-up realism of death.

"Grant has produced a mesmerising page-turner that brilliantly depicts the claustrophobic fear of a young woman grappling with the deadly secrets of the forest and the demonic nightmare lurking within." - PUBLISHERS WEEKLY

The Vanishing Of Katharina Linden

On the day Katharina Linden disappears, Pia is the last person to see her alive. Terror is spreading through the town. How could a ten-year-old girl vanish in a place where everybody knows everybody else?

Pia is determined to find out what happened to Katharina.

But then the next girl disappears…

SHORT-LISTED FOR THE CILIP CARNEGIE MEDAL

"Grant's splendid début, set in a claustrophobic German town, combines the grisly folk-tales of the Brothers Grimm with the insiduous rumour-mill of a small community... The excellent writing, and the eschewing of anything remotely winsome or mawkish, make this an eerily subtle literary page-turner. Wonderful." - LAURA WILSON, GUARDIAN

"Densely imagined and intricately plotted, it's one of the most original and enjoyable children's novels I've read for some time." - THE TIMES