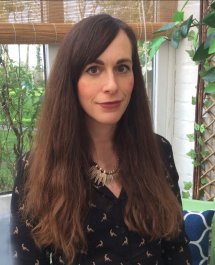 Gina Blaxill has an English degree from Cambridge University and now works in schools liaison, helping teenagers puzzle out the mysteries of higher education. Between the ages of 11 and 15 she wrote an epic 36 part story featuring over 1,000 characters – she still remembers most of their names! Her first novel, Pretty Twisted, was published by Macmillan in 2011, her second novel, Forget me Never, was published in 2012 and won the Oldham Brilliant Book Award 2013. Gina’s most recent book, Saving Silence, was published by Macmillan and won the Warwickshire Book Award.

You Can Trust Me

When Alana's best friend is found drowned in a pool, the forensic reports discover date-rape drug GHB in her blood. GHB from a drink Alana knows was meant for her.

Despite the swirling rumours, the suspected group of boys seem untouchable. To investigate, Alana allows herself to be pulled into their glittering orbit.

But among shifting alliances, changing alibis and buried secrets, can she pinpoint which of the boys is responsible before she becomes their next target?

All the Better to See You

In and around the ancient forest of Aramor, an urban legend thrives – the legend of the wolf who preys on travellers under the full moon and has even been known to attack humans in their own homes.

As a townsperson who lives on the edge of the forest, Red is well versed in the danger of the wolf. But trouble has never come too close to home. So when Red travels through the forest at night - even when a full moon sits high in the sky - she never sticks to the path like other townsfolk do. But then, Red has always been different.

In the depths of winter, whispers of the wolf suddenly become more frequent, and attacks start to surge. This is no ordinary wolf they’re dealing with. Suddenly the townsfolk start suspecting each other. But when you don’t know who to fear, how can you protect yourself?

Ros has a secret crush on Jonathan. Jonathan is massively hung up on Freya (even after she dumps him). And Freya? Well, Freya is a beautiful enigma. Even more so when she goes missing without a trace . . .

When Sophie's cousin Danielle dies after a fall from her balcony, the police dismiss her death as suicide. She had broken up with her boyfriend and had suffered from depression in the past. Sophie isn't so sure, however, and when she finds a memory stick in a pair of Dani's old jeans, some new photos and information come to light that point to something more sinister.

Sophie and her friend Reece investigate further and soon find out that Dani was involved with something very dark and very dangerous. As Sophie and Reece become more and more deeply involved they put themselves in huge danger too, accessing secret data, facing kidnap attempts and worse. And as they uncover the terrible truth about what really happened to Dani, Sophie and Reece must also face their feelings for each other . . .

It's not easy being the new kid at school. It's even harder when people want you dead.

Sam's been an outsider ever since he moved to London. A loner from the North who won't let anyone in. Former head girl and all round school-star Imogen had pretty much given up trying to befriend Sam before that night on Walthamstow high street. The night he wanted to tell her a secret, and someone tried to murder him.

But Sam isn't the only one whose life is in danger. Although she doesn't know it, Imogen is being watched. And if she doesn't give these people what they want, they'll silence her too. Permanently