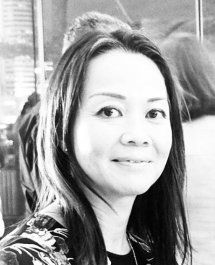 Eva Wong Nava was born on a tropical island where a merlion spurts water. Her ancestors braved monsoon winds sailing to British Malaya to plant roots in Southeast Asia. When the winds changed, they sailed again and found another home somewhere in the western hemisphere.

She combines degrees in English Literature and Art History, and writes stories that explore identity, culture, and belonging. Eva has done many things in life but writing remains her favourite thing to do. She has written an award-winning middle-grade novel and several picturebooks. Eva has been a speaker at the Asian Festival of Children’s Content on writing about diversity and representing marginalised voices.

A passionate collector and reader of picture books, she teaches the art of picture book writing at Picture Book Matters. Eva writes full-time and lives in London with her family and two scampering squirrels.

Chinese New Year is right around the corner and Mai-Anne is so excited! As her family start decorating the house, there's a knock on the door... her grandmother, Nai Nai, has arrived!

They start their celebrations with a traditional meal filled with fish for good luck, noodles for long life, dumplings for blessings and a WHOLE chicken. Then after dinner Nai Nai tells the story of how Chinese New year began, with the Great Race!

Join Mai-Anne as she learns about twelve animals and their special powers in the story of how Chinese New Year began!