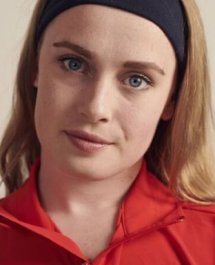 Ellie Robinson is a multi medal-winning British swimmer, and a world-record breaker in the 50m and 100m butterfly. She won Gold and Bronze medals at Rio 2016 and a Commonwealth Gold in 2018, before competing in the Tokyo 2020 Paralympics. Named BBC Young Sports Personality of the Year in 2016, she has also been awarded an MBE. Ellie is now a student and author, and GOLD MEDAL MYSTERIES is her first book for children.

Thief on the Track

Hannah, Maria, and Seb are at the World Championships in Tokyo, bonding over their excitement at watching their favourite athletes compete. But Jesse Marks, a star runner on the US relay team has had his gold medal stolen! The sport park is alive with gossip and as the three new friends begin to investigate, several suspects begin to emerge. With time running out before the final race is run, can the detectives uncover who is out to sabotage the team?

The race to solve the case is on in this twisting, action-packed look-behind-the-scenes at the world's biggest sporting event, with clues and illustrations throughout from James Lancett.