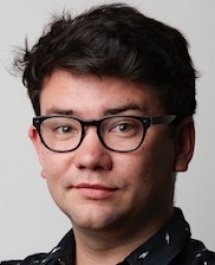 Dominic Beesley was born in the UK, but has also lived in Kuwait and the UAE. He’s always loved reading books, as well as trying to write his own, and studied English Literature and Creative Writing at Bath Spa University. He’s since gone on to write for magazines including Alpha, Hype and Time Out Dubai, where he interviewed stars like Fatboy Slim and Lou Bega. Dominic has since swapped magazines for middle grade, and writes clever, funny fantasy stories that are full of heart. His debut novel, Pure Imagination, published in 2020 in Audio format.

Oswald doesn’t want a new friend either, especially not a book-loving, bed-making, broccoli-eating boy. But when an imaginary friend gets a new assignment, they’re stuck there until the kid no longer needs them. And with Oswald’s home world of Imagination mysteriously crumbling away into nothing, befriending Reggie seems like a safer bet than disappearing with it.

But when Oswald forgets Reggie’s birthday, Reggie runs away to Imagination. A world where a kid’s wildest dreams can come true...and their worst nightmares. A world where bugbears lurk in the forest, where sabre-toothed hamsters might be waiting behind a bush and where you can never be sure if the new friend you’ve made can be trusted.

Now Oswald needs to find and rescue Reggie and fast. Reggie could be the thing everyone’s been looking for to save Imagination - but if they’re not careful, he could be the one to destroy it.