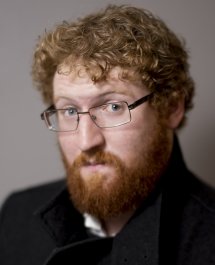 A graduate of the MA in Creative Writing from University College Dublin, Dave Rudden is an author, actor and creative writing teacher based in Dublin. His first novel, KNIGHTS OF THE BORROWED DARK, was called ‘a magical debut’ by the Guardian and ‘reminiscent of Douglas Adams’ by R.L. Stine. KNIGHTS went on to win the 2016 Irish Book Award for Best Senior Children's Novel and was chosen in 2017 as the Dublin UNESCO Citywide Read. Dave is also the author of two Doctor Who anthologies; TWELVE ANGELS WEEPING and THE WINTERTIME PARADOX, as well as music videos, theatre and television.

Dave has delivered talks and author events in hundreds of schools, universities, libraries, and festivals, both nationally and internationally. He currently serves as a Creative Fellow of UCD, is DCU’s first writer-in-residence, and regularly collaborates with RTÉ’s Home School Hub to bring writing tips and motivation to a national audience.

The Wintertime Paradox: Festive stories from the World of Doctor Who

The incredible untold stories of Doctor Who Christmases past, present and future . . .

Did you know Davros and the Doctor met for three Christmases, on different planets, across time and space? Have you heard the one about the time the Plasmavores came to pay a festive visit? Or when Madame Vastra fought a cyborg?

The perfect collection for the bleakest - and sometimes brightest - time of the year, these are the tales to get you halfway out of the dark . . .

This thrilling anthology presents a fantastic collection of adventures through time and space, featuring the best-loved characters and places from the Doctor Who world.

Twelve extraordinary Doctor Who stories, each featuring a monstrous villain from the Doctor Who world.


On every planet that has existed or will exist, there is a winter . . .


Many of the peoples of Old Earth celebrated a winter festival. A time to huddle together against the cold; a time to celebrate being half-way out of the dark.


But shadows are everywhere, and there are some corners of the universe which have bred the most terrible things, lurking in the cold between the stars.


Here are twelve stories - one for each of the Twelve Days of Christmas - to remind you that to come out of the darkness we need to go into it in the first place.


We are not alone. We are not safe. And, whatever you do: don't blink.

There's nothing like an apocalypse to kick off the school year.

Denizen Hardwick has travelled to Daybreak, the ancestral home of the Order of the Borrowed Dark, to continue his training as a knight. But lessons have barely begun before an unexpected arrival appears with news that throws the fortress into uproar.

The Endless King has fallen, his dark realm rising in a brutal civil war. When the conflict strikes closer to home, Denizen and his friends face their greatest challenge yet. For if Daybreak falls, so does the world.

The second book in the action-packed Knights of the Borrowed Dark trilogy.

After an epic battle against the shadowy monsters of the dark, Denizen Hardwick finally feels like a true Knight. The court of the Endless King has even requested a meeting to thank him for saving the King’s daughter. It’s a raremoment of peace between the Knights and the dark, and it’s either an honour or a trap. There’s only one way to know for sure…

The meeting almost immediately dissolves into a battle. And that’s not the worst of it.

There’s another order of people who can communicate with the monsters of the dark. A family who worships the dark. And if they succeed in their bid for power, even an alliance between Denizen and the Endless King’s daughter won’t be enough to save our world from the shadows...

Knights of the Borrowed Dark

Denizen Hardwick doesn't believe in magic - until he's ambushed by a monster created from shadows and sees it destroyed by a word made of sunlight.

That kind of thing can really change your perspective.

Now Denizen is about to discover that there's a world beyond the one he knows. A world of living darkness where an unseen enemy awaits.

Fortunately for humanity, between us and the shadows stand the Knights of the Borrowed Dark.

Unfortunately for Denizen, he's one of them...