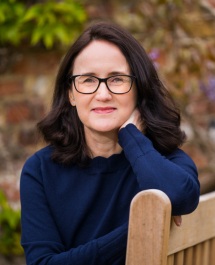 A.M. Howell completed a BA and MA at the University of Manchester and now writes policy documents for local government. In 2015, she was one of fifteen writers selected to take part in the Curtis Brown Creative Writing for Children Course, tutored by children’s author Catherine Johnson.

Her first novel, The Garden of Lost Secrets is loosely inspired by the discovery of a 100-year-old gardener’s notebook at Ickworth House. She lives in rural Suffolk with her husband and two sons.

The Secret of the Treasure Keepers

Ruth has been whisked off to the lonely Rook Farm to investigate the discovery of long-buried treasure with her mother. But at the farmhouse, she finds secrets lurk around every corner. Joe, the farmer's son, is hiding something about the treasure, while land girl Audrey watches their every move.

But before Ruth can find out more, the treasure is stolen... With a storm coming, Ruth must race to uncover the secrets of the treasure keepers before all of their lives are changed forever.

Mystery of the Night Watchers

MAY, 1910. As the blazing Halley's comet draws close to the earth, Nancy is uprooted to start a new life in Suffolk with a grandfather she has never met. With every curtain drawn shut, Nancy is forbidden from leaving her grandfather's house: no one must know that her or her mother are there.

Yet, when Nancy discovers the house's secret observatory, she watches her mother and grandfather creep out every night... Where are they going? And why mustn't any of them be seen? As the mysteries pile up, Nancy has to bring dark secrets from the past to light - even if doing so will put her own life at risk.

The House of One Hundred Clocks

Helena and her parrot, Orbit, are swept off to Cambridge when her father is appointed clock-winder to one of the wealthiest men in England. There is only one rule: the clocks must never stop.

But Helena discovers the house of one hundred clocks holds many mysteries; a ghostly figure, strange notes and disappearing winding keys… Can she work out its secrets before time runs out?

The Garden of Lost Secrets

It is 1916 and twelve-year-old Clara’s father has gone to Devon to recover from gas poisoning. Clara, and the terrible secret she keeps hidden in her pinafore pocket, are sent to stay with her formidable aunt and uncle at Gardener’s Cottage in the grounds of a country estate.

Clara soon discovers that her new surroundings hold secrets of their own: a locked room and a hidden key, a mysterious boy who only appears in the gardens at night, covert meetings on misty mornings, and a fruit thief who is stealing precious pineapples from the Earl’s exotic hothouses.

But for Clara to unravel the garden’s secrets, she will have to face up to a truth she can’t bring herself to acknowledge and a war she’s desperate to forget.